One common pest you will find in Las Vegas, and other hot desert cities is the scorpion. Scorpions can be a dangerous nuisance when there is an infestation in your home or business, especially as they are one of the most common winter pests. Although there are several different species of scorpions in Las Vegas, there are a few types that are more prevalent in the area.

Here are the types of scorpions you should look out for in Las Vegas and what you need to know about them: 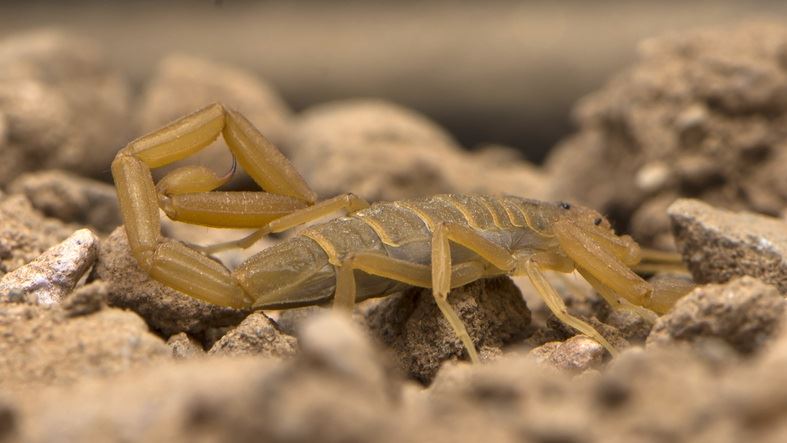 The bark scorpion might be small, but it is also the most venomous scorpion in North America. Unfortunately, this is the scorpion you’re most likely to see in Las Vegas. Not only are they venomous, but they tend to live in large communities that can easily invade a home or property if not kept under control. If you see one bark scorpion, it’s safe to assume that there are many more in the vicinity.

Bark scorpions are usually about three inches in length and rarely grow larger than that. They are generally a light brown color ranging anywhere from yellowish to tan. Bark scorpions are distinguishable by their slim tail and a stinger with a pronounced curve. They seek out cool, moist environments, so you can often find them hiding under potted plants, sinks, showers, or garages.

Because Las Vegas has such hot summers, bark scorpions will often sneak indoors to find relief from the heat. This is when they are most dangerous because they will sting at the first sign of danger. You may be going about your normal routine only to find a bark scorpion hiding in your shoe! Be sure to check all the spots scorpions love to hide in your home to protect your family and pets from venomous stings. 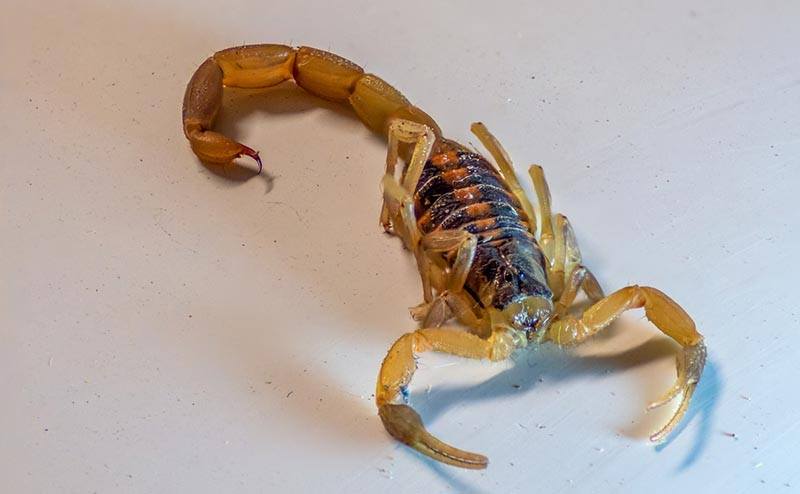 Striped tail scorpions are also about three inches in length and have a lighter yellowish color. They are not as good at climbing or getting into buildings as bark scorpions, so you won’t see them as often in homes. However, they can slip through cracks and holes of a building if they are big enough. It’s always a good idea to check your home for areas that might give scorpions easy access before the hot summer months come around.

The giant hairy scorpion, also known as the desert hairy scorpion or the Arizona hairy scorpion, is the most menacing-looking species you’ll see in the Las Vegas area. As the name suggests, this is the longest scorpion in the United States, generally growing between 6 and 8 inches in length. The scorpion’s tail is also covered in black hair, making its appearance even more startling. The rest of the body is usually tan or olive color.

Despite its intimidating appearance, giant hairy scorpions are the least aggressive and have weak venom in comparison to other scorpion species. They will sting when provoked, but will generally shy away from threats or movement. In fact, some people choose to keep giant hairy scorpions as pets because they are bigger, live longer, and are less threatening than other types of scorpions.

How to Prevent Scorpion Infestations

Part of living in Las Vegas is dealing with potential infestations of desert-dwelling pests, including spiders, cockroaches, bees, rodents, and scorpions. There are several effective treatments to removing infestations, but prevention is a much safer method. When it comes to scorpions, there are certain things you can do to help prevent an infestation in your home or business. Here are some tips:

If you do find yourself with a scorpion problem in your home, the sooner you call a professional exterminator in Las Vegas, the better. By leaving the problem untreated, you put your family and pets at risk of painful and dangerous scorpion stings. Keep your home safe and protected with the help of an experienced pest control company that knows exactly how to deal with a scorpion infestation.