No one ever thinks of a cockroach in a positive way. In fact, the first thought that most people have about cockroaches, after they feel disgust, is how to exterminate them. However, a group of researchers look at cockroaches and see them as an effective tool for disaster relief and recovery. 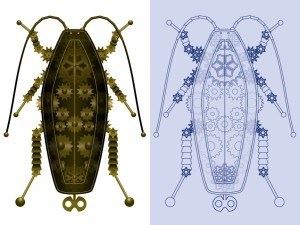 A group of scientists at Texas A&M University in College Station conducted a study using American and Discoid cockroaches to see if the bugs could be used for disaster recovery efforts.

On the larger Discoid roaches, the researchers glued small “backpacks” to the bugs. These packs contained wireless receiver with battery and a micro controller. The researchers were able to control these roaches in the same manner.

The study was very successful. The researchers were able to manipulate the action of the roaches without any problems. Additional tests are continuing to verify the findings of this research.

So Why Would Anyone Want A Cyborg Cockroach?

Cockroaches can easily enter areas that humans or other remote controlled vehicle could not access. These researchers believe that relief efforts for disasters, such as a mine collapse, a nuclear or chemical spill, or even an earthquake, could be made easier if these cyborg roaches were sent into the areas to be the “eyes” for the rescue teams. These reconnaissance bugs could protect the lives of rescue workers as well as save the lives of those who are trapped in the disaster zone.

It is hard to imagine that a cockroach could ever have a useful purpose. Most people would even feel relieved if they never had to encounter one of these bugs during their entire lifetime. However, since these bugs are not going to easily disappear, it is a wonderful thing that these scientists have found a way to make them useful and almost appreciated.

If you’d rather leave cockroaches to the scientists and keep them out of your home, call Fischer’s Pest Control.